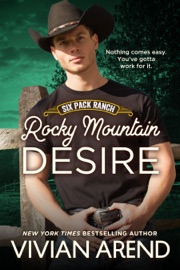 Matt Coleman always figured at this point in his life, he’d be settled down with a family. Since his ex split for the big city, though, no way will he give anyone else the chance to drop-kick his heart. Physical pleasure? Hell, yeah, he’ll take—and give—with gusto, but nothing more.

Hope Meridan is working long hours to hold on to her new quilt shop, going it alone since her sister/business partner ran off. Sex? Right, like she’s got the time. Not that she doesn’t have the occasional dirty fantasy about Matt. Fat chance he’d dream of knocking boots with her—the younger sister of the woman who dumped him. Nope, she’ll just have to settle for friendship.

Friends would be far easier if there wasn’t something combustible going on between them. And when casual interest starts to grow into something more, their tenuous bond strengthens in the heat of desire. But it may not survive the hurricane-force arrival of the last person either of them ever wanted to see again…

Warning: Small-town rivals, men in pursuit and family meddling—in good and bad ways. Look for a cowboy who knows how to rope, ride and rein in a hell of a lot more than eight seconds of sheer bliss.