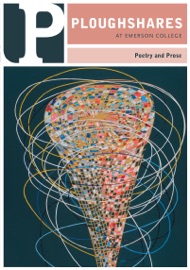 The Winter 2017-18 issue of Ploughshares. Ploughshares is an award-winning journal of new writing. Two out of each year's three issues are guest-edited by prominent writers who explore different personal visions, aesthetics, and literary circles; the Winter issue is staff-edited.
This staff-edited issue of Ploughshares features new work by Alice Hoffman, Paige Lewis, Carl Dennis, Amy Gerstler, and Charlie Clark. The poems, short stories, and essays in this collection question how we react to change and to our surroundings.
The winners of our 2017 Emerging Writer’s Contest appear here, along with the announcement of our 2017 John C. Zacharis First Book Award winner.