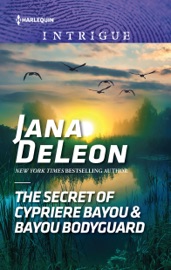 For Olivia Markham, laMalediction is the ideal setting in which to complete her work. But something is sending a chill up the usually fearless author’s spine. There are the unearthly noises, the sliding panels, the hidden passageways…and John Landry, the sexy caretaker. Working together to uncover laMalediction’s alarming secrets and root out the evil stalking them, John finds Olivia impossible to resist, and he knows it’s only a matter of time before something unexpected—and undeniable—happens between them….

Bodyguard Brian Marcentel knew Justine Chatry had a job to do, but so did he. He’d been hired to keep her safe—from whatever lurked behind the walls of a long-neglected mansion. And yet, the beautiful researcher insisted on helping him investigate every suspicious noise and following him through the murky bayou as he tracked down trespassers. All of that paled in comparison, though, to his greatest challenge: trying to resist her when the fear took over and she looked to him for protection.