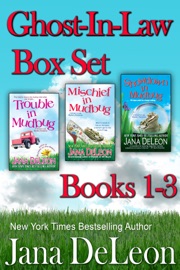 Scientist Maryse Robicheaux thought that a lot of her problems had gone away with her mother-in-law’s death. The woman was rude, pushy, manipulative and used her considerable wealth to run herd over the entire town of Mudbug, Louisiana.

DEA Agent Luc LeJeune is wondering what his undercover assignment investigating the sexy scientist has gotten him into – especially as it seems someone wants her dead. Keeping his secrets while protecting Maryse proves to be easier than fighting his attraction for the brainy beauty.

Sabine LaVeche needs to locate a blood relative fast – her life depends on it. When Helena Henry shows up offering help, Sabine knows she’s really in for trouble when it’s the best idea she’s heard in a while. When private investigator Beau Villeneuve takes on her case, things heat up in more ways than one, but as they begin to uncover the secrets of Sabine’s past, the one thing that becomes clear is that someone doesn’t want Sabine to get the answers she seeks.

Who killed Helena Henry? The shorter list may be who didn’t want her dead.

Psychic Raissa Bordeaux thought she’d left her former life behind, but when a child is kidnapped, she risks her secret identity by offering the police help with the case. New Orleans Detective Zach Blanchard doesn’t believe in psychic hooey and is certain Raissa didn’t get her facts about the case from a crystal ball. He suspects her of something besides being the most intriguing and attractive he’s every come across. But when Raissa’s secrets put her in danger, can Zach convince her to trust him with the truth before it’s too late?