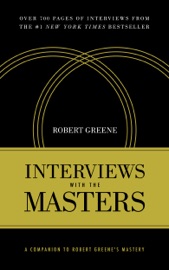 Interviews With the Masters

A companion to the #1 New York Times Bestseller Mastery

More than 20,000 hours of research and thought went into Robert Greene's stunning book, Mastery. In a departure from his previous works, Robert Greene interviewed nine contemporary masters, including tech guru Paul Graham, animal rights advocate Temple Grandin, and boxing trainer Freddie Roach, to get their perspective on their paths to greatness. Those interviews are now available to readers for the first time. Interviews with the Masters presents more than 700 pages of revealing insight directly from these contemporary Masters; from how they learn and think, to how they put it all together and create.

-Paul Graham used a hacker's mentality to create a programing language and a billion dollar portfolio.

-Freddie Roach's trademark techniques made him one of the most well-known boxing trainers in the world, guiding talents like world champion Manny Pacquiao and UFC Champion Georges St. Pierre.

-Cesar Rodriguez Jr. went from the bottom of his Air Force class to become the "Last
American Ace.”

-Temple Grandin emerged from a chaotic childhood with autism to become a leader in animal sciences.

-VS Ramachandran’s obsession with anomalies led to major discoveries that solved bizarre neurological syndromes like phantom limbs and body-identity disorders.

This companion to the #1 New York Times Bestseller Mastery is a playbook to the lives of today’s Masters that readers can use to guide them on their own path to Mastery.