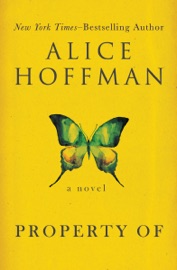 The mesmerizing debut of a major American writer

On the Night of the Wolf, the Orphans drive south on the Avenue, hunting their rival gang, the Pack. In the lead is McKay, their brooding, courageous President. Left waiting at the clubhouse is the Property of the Orphans, tough girls in mascara and leather who have declared their allegiance to the crew. Tonight, a new girl has joined their ranks. She waits only for McKay.

Drag races, dope, knife fights in the street. To the seventeen-year-old heroine of Alice Hoffman’s stunning first novel, the gritty world of the Avenue is beautiful and enthralling. But her love for McKay is an addiction—one that is never satisfied and is impossible to kick. Deeper and deeper she falls, until the winter’s day when she decides to break the spell once and for all.

A strikingly original story about the razor-thin line between love and loss, Property Of showcases the vivid imagery, lyricism, and emotional complexity that are the hallmarks of Alice Hoffman’s extraordinary career.

“A remarkably envisioned novel, almost mythic in its cadences, hypnotic . . . The imagining is true, the writing lovely.” —The New York Times

“Showing the magic that lies below the surface of everyday life is just what we hope for in a satisfying novel, and that’s what Ms. Hoffman gives us every time.” —The Baltimore Sun

“With her glorious prose and extraordinary eye . . . Alice Hoffman seems to know what it means to be a human being.” —Susan Isaacs