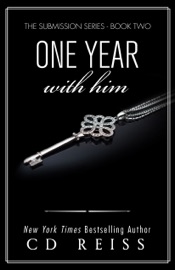 One Year With Him

Monica’s not weak or fragile, but she’s never going to be the same under Jonathan’s thumb.
He’s so dark. So cruel. So demanding.
She can’t commit to him. She can’t abdicate her will to his or promise to play his games.
But he keeps drawing her back in.
He’ll break her, but in the end, she’s going to beg to be shattered.
----
An Audie Award Finalist under the title Control Burn Resist
—————
Previously released as Control Burn Resist and Dom ination.